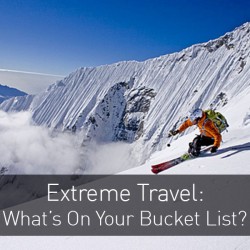 Travel nursing is all about pushing the boundaries of what you can do and facing your challenges head-on. But why limit this to the four walls of your employer’s building? As travel nurses, we can see and do what most can’t, while getting paid to work fantastic jobs. This week we look at extreme travel activities – those that allow us to rise up to challenges in a whole new way. Check out our picks and create your 2018 bucket list!

Getting a birds-eye view of Las Vegas from your flight in or from the Stratosphere Hotel is thrilling in itself, but pulling Gs in an aerobatic plane takes aerial sightseeing to all new heights. If you think you’re ready for a Top Gun experience, Sky Combat Ace lets you take over the controls of a real airplane over Sin City. Your pilot demonstrates each maneuver, such as the barrel roll, loop and hammerhead, before letting you test your own skills. You may want to save the $2.99 steak and eggs buffet for later.

There is a hidden gem just outside of Nashville, and its underground. In McMinnville, Tennessee, you can explore Cumberland Caverns, which has more than 32 miles of underground passageways complete with cool rock formations, waterfalls and pools. Then, you can sleep over! As part of the overnight package, you get excursions that include the All Around the Mountain tour, featuring ladder climbs, cave crawling and camping out in an underground cave, followed by breakfast in the Volcano Room, a large space that is used for concerts and filming of the show Bluegrass Underground. 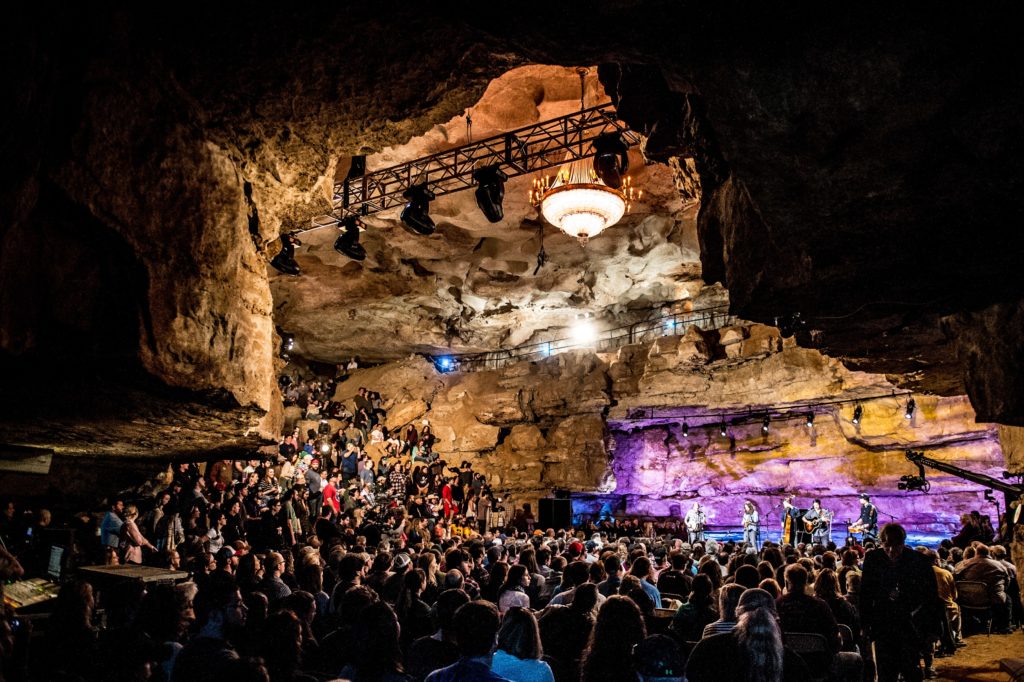 Sometimes, you want to ski outside the ropes. With heli-skiing in Anchorage, Alaska, you can be transported to slopes only accessible by chopper. The deep, ungroomed powder makes it the great for experienced skiers. Set within one of the largest state parks in America, just north of Anchorage, the Chugach Mountains offer thousands of miles of terrain, powder bowls and steep vertical descents, all of which means you’ll never ski the same line twice. Chugach Powder Guides is a tour operators to check out if you’re there. 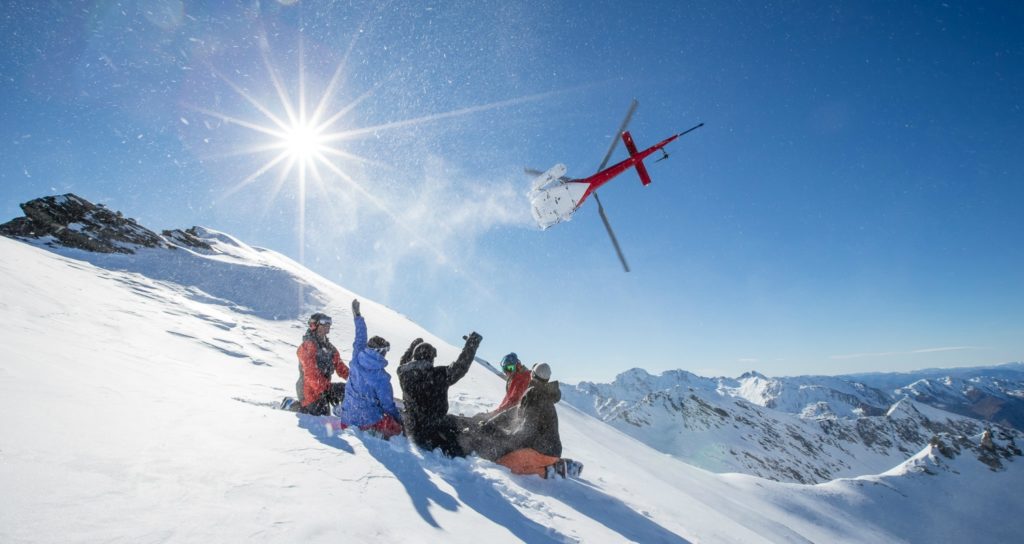 Bobsled down an Olympic course in Utah

When the Olympics left Utah in 2002, they left behind and Olympic Village, ski jumps, and most notably, a bobsled track. Olympic athletes train for years for what you’ll can tackle after less than an hour of instruction: bobsledding down the 2002 Olympic Sliding Track in Park City, Utah. Up to three passengers can board the Comet Bobsled with a professional pilot to wind down 10 curves at speeds of up to 70mph and generate up to five times the force of gravity. It’s like an ultimate roller coaster on ice. 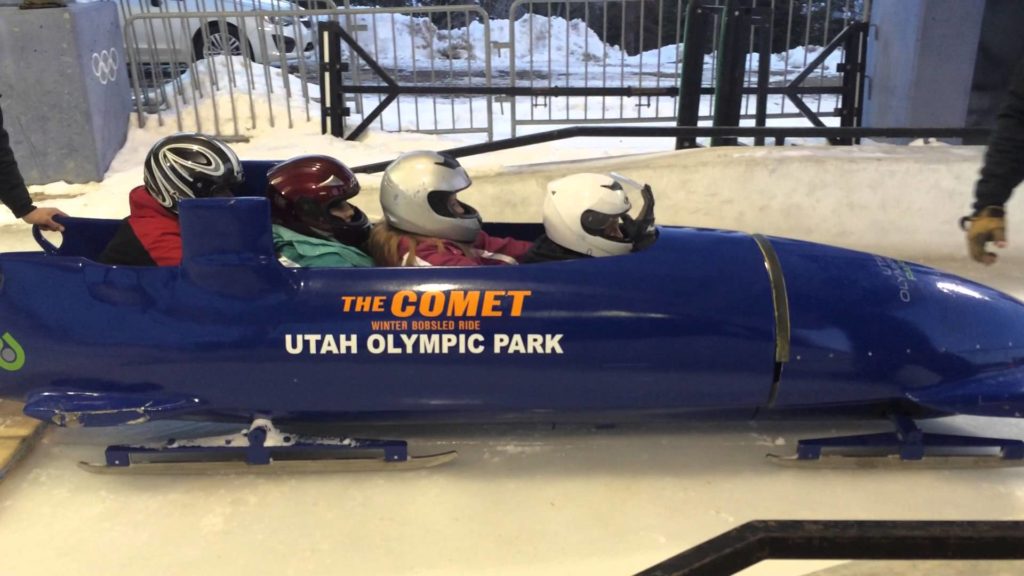 This single-track mountain-bike route heads primarily downhill from the Tahoe Rim Trail for several miles—the total descent is more than 2,000 feet. With multiple steep drops (especially at the start), sections traversing nothing but rocks, plus mind-blowing views of the California-Nevada–line, it sure lives up to its name. If you’re not bringing your own wheels, Wanna Ride Tahoe can provide bikes, helmets and shuttles to Mr. Toad’s and other local trails.

BASE jump off Perrine Bridge in Twin Falls, Idaho

Sure, it’s one of the more dangerous activities you can take part in, but we won’t tell your insurance agent. Part skydiving and part cliff jumping, BASE jumping involves jumping off of relatively low-altitude launch points with a short amount of time to deploy your parachute. Perched nearly 500 feet above the Snake River, Perrine Bridge is known worldwide for the adrenaline-charged activity and, unlike many other destinations for the sport, doesn’t require a permit. The only prerequisite is guts, but TandemBASE guides new jumpers through it all. 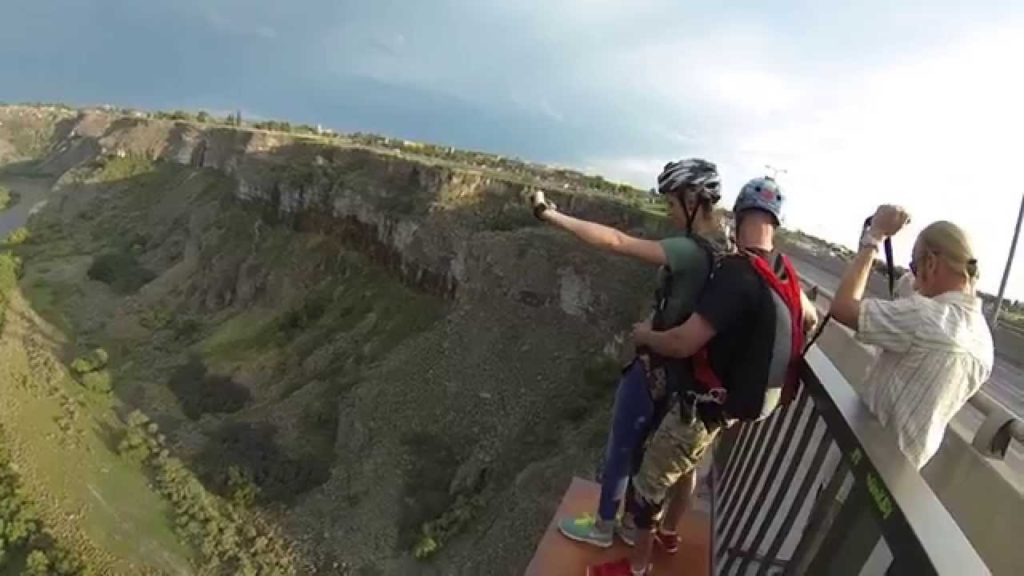 Known for its world-class mountain biking, Moab also has great “canyoneering” routes that take you from carved sandstone slot canyons to ancient ruins and water-filled pools. Red River Adventures offers several guided canyoneering routes, including the relatively easy to moderate Ephedra’s Grotto and Chamisa Canyon, both of which include hiking, scrambling and a couple of rappels each. For extra fun, try a combo day trip that combines canyoneering with rafting down the Colorado River. 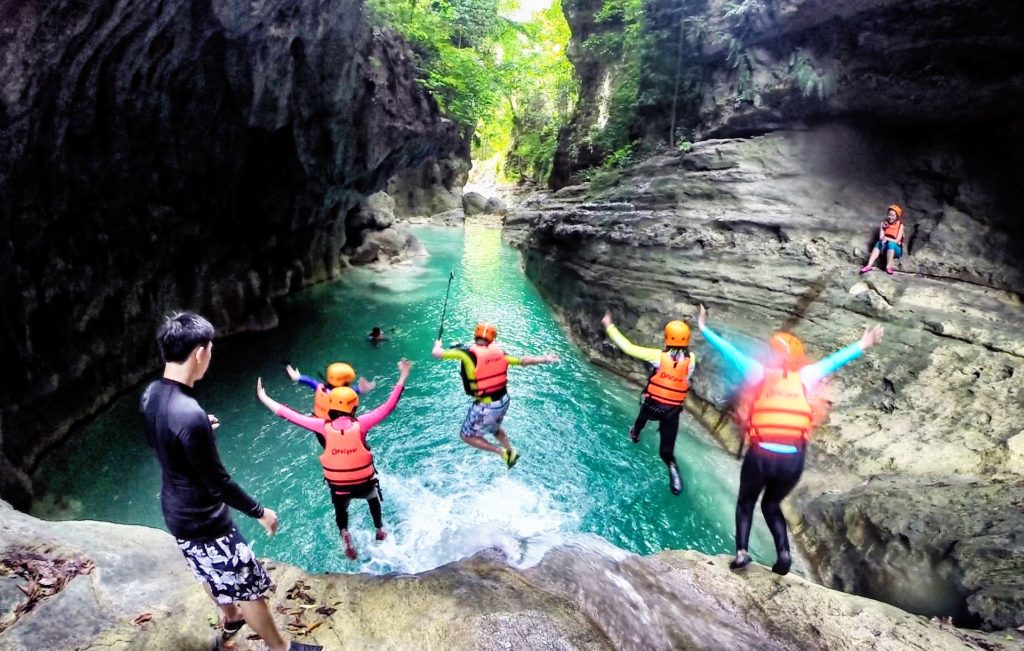 One of the most exclusive adventures on this list is going Zero G in an airplane, experiencing feelings previously only achieved by astronauts. Through aerobatic maneuvers called parabolas, you can experience true weightlessness in a Boeing 727. The most convincing simulation of a commercial space flight, it comes with a $4,950 price tag and takes place regularly during the summer and fall in Las Vegas, as well as Cape Canaveral and other U.S. cities, including Miami, New York, San Francisco and Washington, D.C. It’s probably the closest thing you can get to actual space travel! 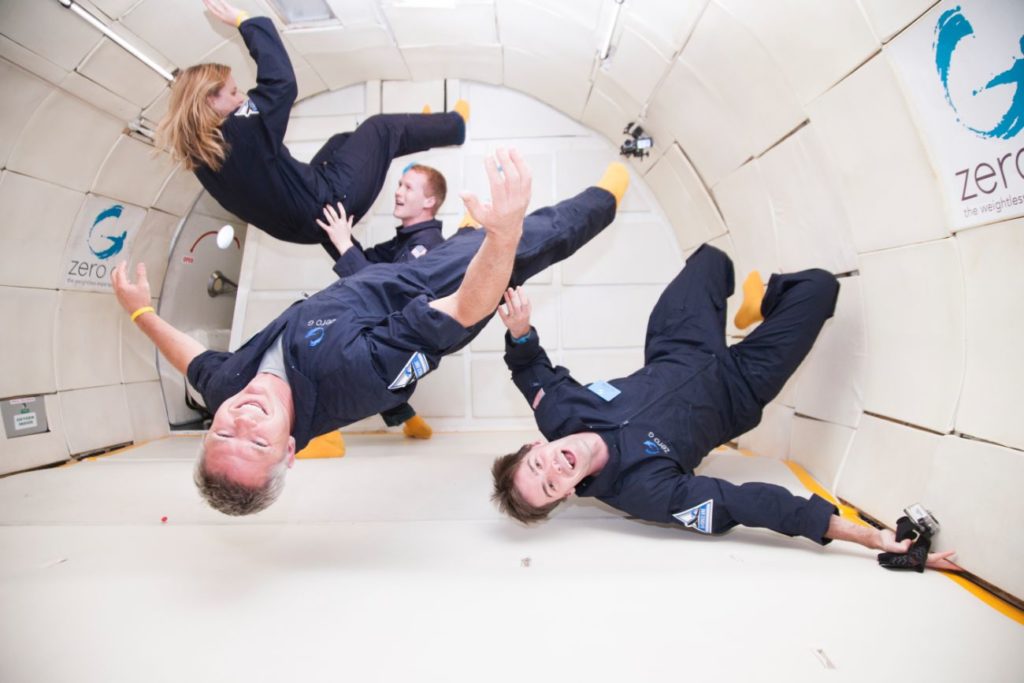 Zoom 600 feet above a Catskills valley at just under the highway speed limit along a 3,200-foot cable. The Skyrider tour is the most daring of three options at Hunter Mountain’s New York Zipline Adventure Tours, the largest zip line course in North America and the second-largest in the world. The 650-foot-long mid-mountain tour, which also traverses rope bridges and a rappel, is a tamer option for beginners, and you can also try it at night. 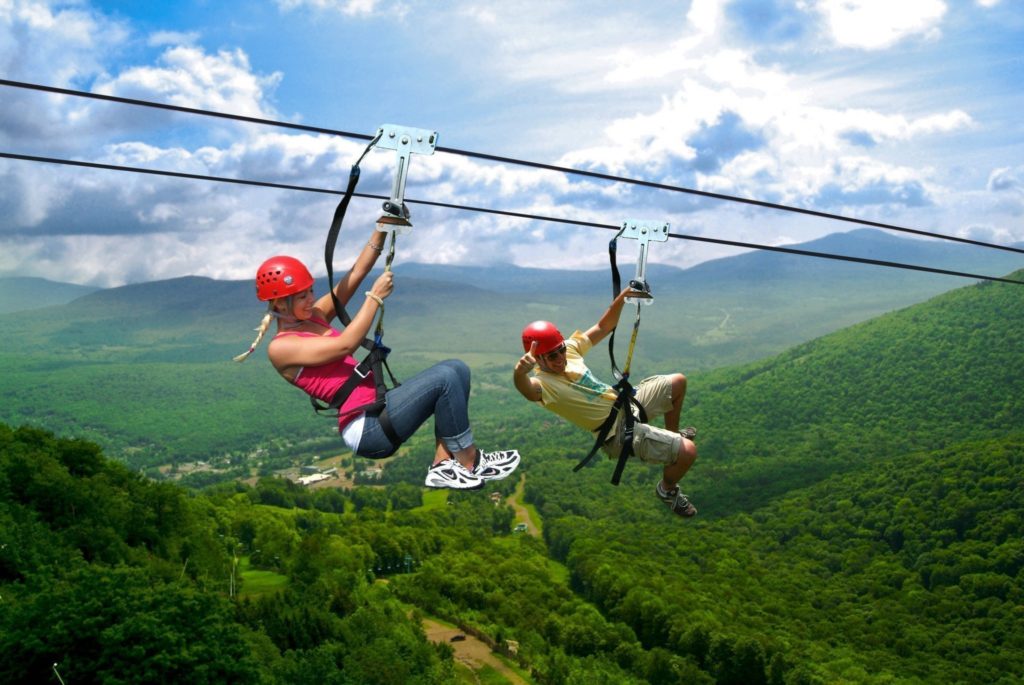 Skydive over the beach in California

Take in sweeping views of the Central California shoreline from a height of 10,000 feet as you free-fall over the Pacific Ocean at 120mph with skydiving in Pismo Beach, CA. Your pre-jump nerves will be calmed by the knowledge that the landing will be cushioned by the soft sand of the beach. Local outfitter Skydive Pismo Beach offers a trio of tandem skydiving options—25, 45 or 60 seconds—and briefs novices before taking to the skies. 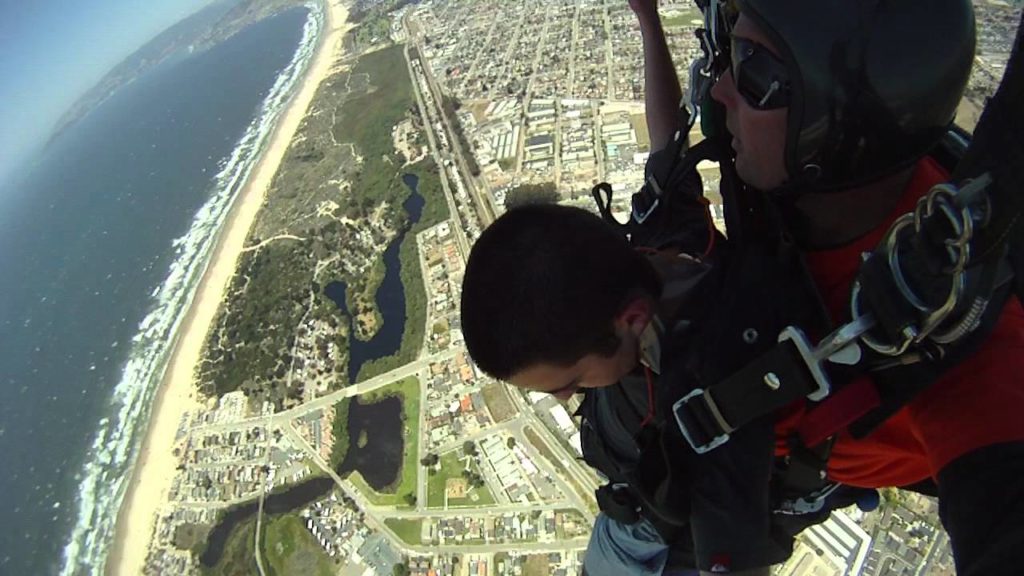 Hike a 14er in Colorado

What’s a 14er? It’s a mountain at least 14,000 feet tall, and there are more than 50 to choose from in Colorado. This includes the 14,007-foot Sunshine Peak in the San Juan Mountains and the 14,440-foot Mount Elbert, the highest summit in the Rocky Mountains. One of the most popular in the state is Pikes Peak, near Colorado Springs, at 14,115 feet tall. Many trails ascend to the top, including the most popular, the 13-mile Barr Trail. 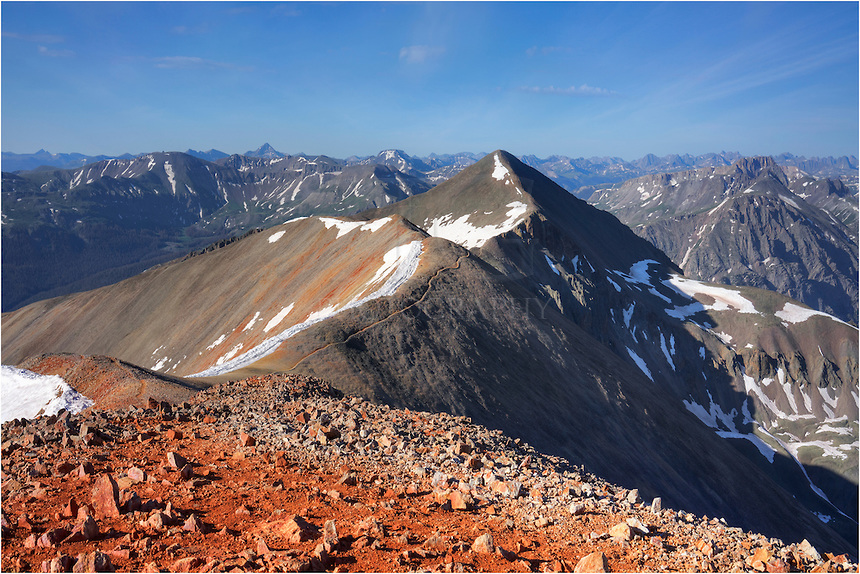 Are you ready to create your 2018 extreme travel bucket list? Check out all our travel nursing opportunities here and pick your next destination!